A study run by Oxford Economics requested by the STSA in 2016, outlines the importance of this economic sector in Switzerland. This study also unveils the positive impact that the introduction of a tonnage tax would have for the country’s competitiveness and attractiveness for businesses. According to the latest statistics published by UNCTAD, among maritime nations, Switzerland ranks 9th in the world and 4th in Europe in terms of gross tonnage.

The future orientation of the Swiss flag and maritime fleet

An opportunity for the shipping industry in Switzerland

If a tonnage tax is introduced in Switzerland, the following could be expected as of 2027:

This high potential represents an important factor, just like the competition of other countries getting stronger in this field: The UK through the Brexit, France recently granting incentives and also Luxembourg, where the introduction of a tonnage tax is being discussed. This illustrates the need for Switzerland to boost its attractiveness for this largely unknown sector.

The introduction of a tonnage tax would send a strong signal that Switzerland is taking measures to enhance its ability to compete.

In the form currently debated, ecological criteria will also be considered. This will encourage investments into modern and safer fleets, that are also more respectful of the environment.

The tonnage tax's several advantages are :

- A simplified management of taxation, for both the tax authority and the companies in the sector. This method of taxation is based on an objectively measurable variable - net tonnage - by independent certifying bodies that determine the transport capacity of the vessels.

- A greater stability and predictability of the level of tax revenues for the cantonal and federal government. A company that decides to adopt the tonnage tax as a taxation method is linked to apply this method for a period of 10 years (lock-in).

The adoption of tonnage tax by a shipping company is not compulsory but optional. Once available, this method of taxation can or cannot be adopted by a given company. 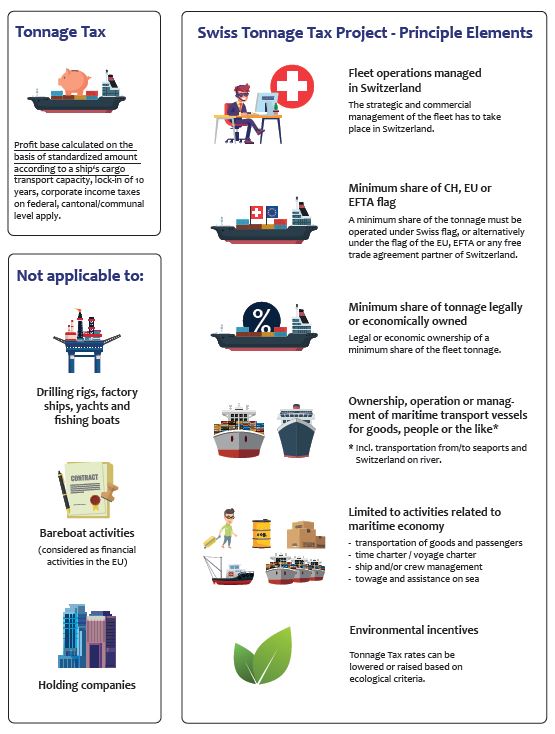